At the risk of getting beat here I think everyone needs to calm down about Valentine’s Day. Only New Years Eve comes close as a date that makes some people want to hide under a duvet.

One of the reasons is it’s very commercialised, but so what, no one’s making us buy a card.  If you love someone write them a letter or a post it note.  Who wouldn’t like a surprise ‘post it’ on Valentine’s Day or maybe that’s just me/it we don’t want it on Valentine’s Day but on some other unspecified day. We have days dedicated to chocolate, guinness, ghosts and pancakes but love it seems is a day too far.

I admit there’s more potential for cheese and downright tackiness with love than pancakes but what’s wrong with having an excuse to focus that little bit more on your other half and they on you for a day? After all how many guys do you know have ever gotten the… ‘I’d prefer something on a regular day when I’m (a) Not expecting it or (b) You’ve not done something wrong, message?

Another reason Valentine’s Day gets people so worked up is other kinds of love like the unrequited, the lost and the disappointed kind.  They don’t necessarily want to be surrounded by the hearts and flowers variety but unless they stop listening to music, watching  movies, reading, remembering or living in general they are still going to be surrounded by it.  Not in glorious technicolour perhaps but love is all around : )

Singletons sometimes find Valentines Day irritating, whether it’s because they’d like to have someone, don’t want to be reminded that they don’t, are quite happy alone or feel they’re better off and don’t believe coupledom should be celebrated any more than singledom, they have their reasons. 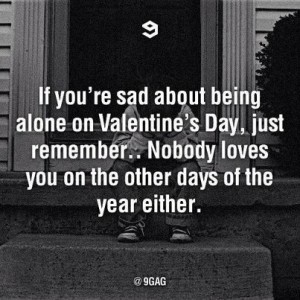 I’m not one for soppy love songs, movies or books.  I’d prefer almost any kind of present to flowers and chocolates on Valentines Day and yes overt ‘romance’ of the hallmark kind is completely nauseating.  So what’s the answer?

I think the real problem with Valentines Day is that everything about it has been decided for us from the gifts and actions to the day itself so that we’re all made the same.  Whether your’re in a couple, single, heartbroken or happy the idea of love and romance is more complex than other ideas.

Protest away but I think what all of us, men and women, really want is the grand gesture and by that I don’t mean a giant bouquet I mean we all want to be taken by surprise, proven wrong and swept off our feet and it’s that potential for love and romance that’s been thwarted by the day.

So we’re back at the ‘I’d prefer something on a random day when I’m (a) Not expecting it or (b) You’ve not done something wrong,’ message.  If you haven’t done anything surprising, different or romantic in a while I’d still suggest maybe starting with Valentines Day but not confining it there and if all else fails there’s always pancakes…