Parents, keep an eye on yourself first…

On Monday my girls and I appeared in an Irish newspaper The Independent as part of a feature on whether parents should check their children’s text messages and internet history.  I’m firmly in the no camp myself how about you?  It’s something that feels wrong to me, like reading someone’s diary or eavesdropping on a conversation.  It goes against my nature and as it turns out it goes against my style of parenting too.

Apparently a storm on the subject has erupted after British MP Claire Perry, mum of three and David Cameron’s advisor on childhood has said parents have been ‘complicit’ in creating a culture where teens can make inappropriate contact with ‘strangers at all hours of the day and night’ because they’re not keeping an eye on their online correspondence.

I actually agree with her up to a point.  I’m sure that some parents have been  ‘complicit’ in creating a culture where teens can make inappropriate contact with ‘strangers at all hours of the day and night’ but I don’t agree it’s because they’re not keeping an eye on their online correspondence.

In my opinion the problem is not modern technology it’s good old fashioned communication.  If you have built a good relationship with your child, have always discussed things openly, have given freedoms based on trust, appropriate to their time in life then in my view you have given them the tools they absolutely need such as confidence, self esteem, knowledge and openness that will protect them as much as you or anyone can protect them in this world.

When they do come up against the bullies (still more common in traditional forms than online) or worse and if they find they can’t handle it themselves they will talk to someone.  It might not be you, it might be an aunt or an uncle or someone else but that will make all the difference. 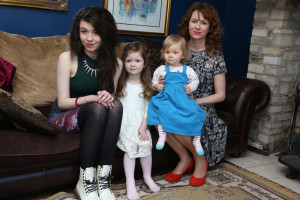 Openness is key because you can’t have successful communication without it.  Children should feel they can talk about anything to you and if possible with the extended family. At first they will because it’s the nature of children not to feel embarrassed or to hold anything back, you know how cute and funny that is when they’re little but this in my view is where you have to ‘keep an eye’ on you.

If you want an open relationship with your child then give some thought to how you react when they tell you something.   A good place to begin is to think of how your own parents used to react to your pronouncements and how that made you feel and act from then on!

It’s a tricky one because it requires a delicate balance that as a parent can be hard to find and that’s why you have to keep an eye on yourself, work on yourself so you don’t teach your children to be secretive for fear of angering, shocking, hurting or embarrassing you or themselves.

To be fair my oldest child is 17 and the youngest are only 4 and 19 months.  If you and your children are only starting down the road of mobile phones and facebook then I would have plenty of discussion and understanding in place first.  They should know that their accounts have to be private not public and you need to understand this too.

They should know the acceptable behaviour, the dangers and the sites to avoid like the plague.  I wouldn’t give these freedoms without these understandings in place.

After that I wouldn’t let children bring phones to bed or spend long hours online, common sense stuff.  In my experience the child that’s been given this freedom and trust and that talks to you will leave her facebook and messages open and forget to log out anyway!

Jane Barry is a communications expert.  She is the eldest of five children and mother of three.

2 thoughts on “Parents, keep an eye on yourself first…”