Today, January 31st is St Brigids Eve and tomorrow St Brigids Day or Imbolc is the all important festival of spring that marks the passage from the dark half of the year to the bright half, hip, hip, hooray, we made it!

In honour of this most important and longest lasting figure from Irish mythology through pre and post Christian Ireland, lets consider her significance in how it might be relevant today. 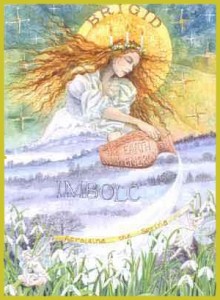 Traditions of this evening in Ireland long ago would have included…

Traditions upheld by people today...People still make ‘St Brigid’s Crosses‘ from rushes that grow wild everywhere and still visit places of pilgrimage associated with Brigid including here in Ballinamore, Co Leitrim where she is supposed to have visited. Tomorrow on the first day of spring, hundreds of people will make the walking pilgrimage to ‘St Brigid’s Well’ just as they have done since time immemorial.

I like the ancient traditions. I think we should bring some of those back. 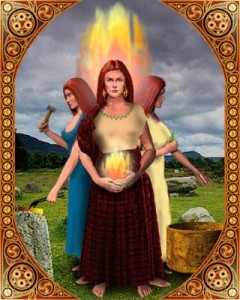 In Irish mythology Brigid was the daughter of Dagda, king of the ancient race of Ireland, the Tuatha de Danann.  Symbolised by fire and represented by the sun, the goddess, sometimes depicted as one of three sisters was revered and worshipped for thousands of years.

Much later in AD450 the girl who would become the legendary healer, missionary, leader and eventually saint was born in Co Louth.

Even without considering the many miracles attributed to Brigid it’s clear she was an extraordinary person widely accepted as a remarkable, charismatic leader and administrator and later, the centre of popular devotion in Ireland. 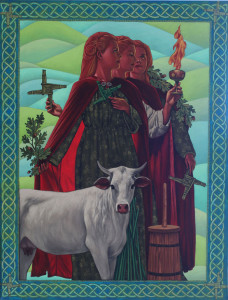 Sadly due to the rigours of male dominated religious organisations a patriarchal society defined by inequality emerged and sadly is still what we live with today.

Today in the spirit of Brigid, the goddess & woman and on this the eve of her feast, in the coming of spring, the season of light, birth and hope I’m highlighting just a few of the grassroots movements that are happening across the world, making female equality this years hot topic.

“Never doubt that a small group of thoughtful, committed, citizens can change the world. Indeed, it is the only thing that ever has.”
― Margaret Mead